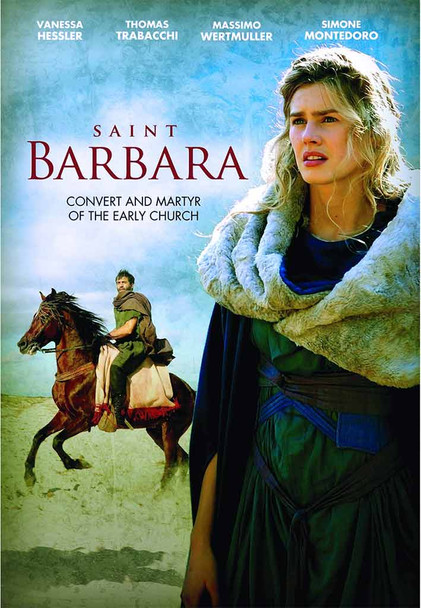 In 303 A.D., Barbara is the beautiful, twenty-year old daughter of Dioscoro, the Roman governor during a time of fierce Christian persecution. Barbara is a pagan, but when Giuliana, a slave raised alongside her almost like a sister, is condemned to death for her Christian faith, Barbara rebels.

She valiantly attempts to save Giuliana, as well as other Christians being persecuted, boldly protesting to her father and other government leaders. When that fails, Barbara makes a daring plan for the successful escape from prison of her Christian friends.

Saint Barbara is also the story of her profound love for Claudio, the noble Roman soldier whose life she saves, as well as her deep compassion for all afflicted humanity. The courageous and holy witness of her Christian friends inspires her to convert to their religion, a decision which will eventually cost Barbara her life.

Before her death, Barbara discovers she has journeyed down the same path as her mother, who was taken from her as a child for having made the same choice, to become a Christian, which had never been told to Barbara as she was growing up.

Barbara is the victim of many acts of cruelty in the last period of her life. The serenity with which she overcomes such barbarity can only be attributed to her new faith in Christ, which gives her the strength necessary to face the most difficult trials and to forgive her persecutors.

To see the trailer, click the Play button to the left of the product image.

This DVD contains the following language options: Italian with English and Spanish subtitles. This movie is Not Rated. 100 minutes.

(This is a Region 1 DVD (playable ONLY in Bermuda, Canada, the Cayman Islands, United States and U.S. territories).

MSRP:
Now: $4.95
Was:
Born in Portugal, Saint Anthony has been adopted by the Italians as the patron of Padua. Once an Augustinian priest, he later joined the newly founded Franciscans and preached throughout Europe,...

MSRP:
Now: $8.50
Was:
Tapestry-style rosary pouch with a beautiful image of Saint Anthony holding the Christ Child.  Many people use this to hold their rosaries though it is a little larger than your usual rosary...

MSRP:
Now: $8.95
Was:
Invoke Saint Benedict for protection and safety while driving with this high quality visor clip.

MSRP:
Now: $8.50
Was:
Tapestry-style rosary pouch with a beautiful image of the Sacred Hearts of Jesus and Mary.  Many people use this to hold their rosaries though it is a little larger than your usual rosary pouch...

MSRP:
Now: $4.95
Was:
Had he pursued his career in law, the name and life of Alphonsus Ligouri would have been forgotten soon after his death. We must be forever grateful that by cooperating with grace, Alphonsus...

MSRP:
Now: $4.95
Was:
Saint Anne, mother of the Mother of God, has remained one of the most dear saints since the very start Christianity. Many shrines in her honor have been the haven of consolation for the spiritually...