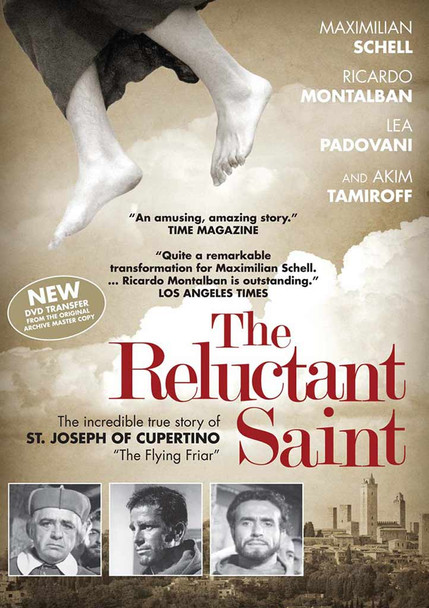 Maximilian Schell stars as "the flying friar", St. Joseph of Cupertino, in this heartwarming and amazing true story of the humble Franciscan friar who literally rose to sainthood.

In the impoverished village of 17th century Cupertino, Italy, Joseph’s peasant mother convinces the reluctant Abbott (Ricardo Montalban) to accept her son into the monastery. With the support of the kindly local Bishop who sees in him a great deal more than others, and by a series of miraculous incidents, the simple but pious Joseph is ordained a priest. Yet some are convinced that it is the devil, not God, who is responsible for Joseph's miraculous powers – until a final miracle reveals to all his true sanctity.

A profound and humorous film for all ages. Also starring Lea Padovani and Akim Tamiroff. Directed by Edward Dymtryk.

• Includes a 16-page Collector’s Booklet with an essay by film critic Steven Greydanus and a biography of St. Joseph of Cupertino by historian and journalist Sandra Miesel. Includes the “lost ending”!

• This film is Not Rated

The Miracle of Our Lady of Fatima (DVD)

MSRP:
Now: $24.95
Was:
The famous Warner Brothers production of the true story of the appearance of Our Lady to three children at Fatima in 1917. It gives a moving and accurate account of Mary’s appearances and...

The Sacred Heart of Jesus