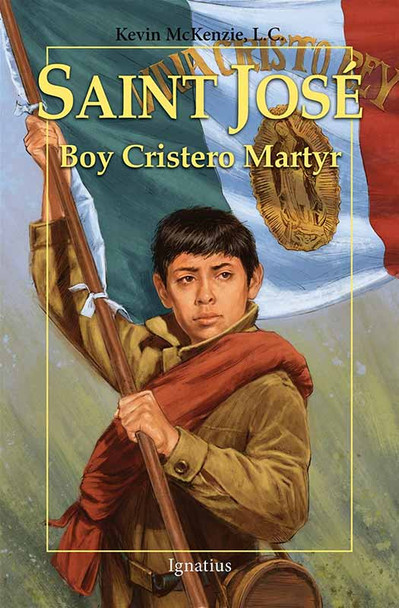 The inspirational story of St. José Sánchez del Río, a 14 yr. old boy in Mexico who died a martyr for the Catholic faith during the Cristero War in the 1920s.

Meet young José and his friend Trino as the war breaks out in their hometown of Sahuayo. Follow José through his own struggles as the violence escalates, up to his joining the Cristero army in 1927 to fight for freedom of religion. Captured by government forces, José refused to deny his faith in exchange for his freedom. Tortured and forced to march to his grave, he cried out, "Viva Cristo Rey!" (Long live Christ the King) José died as he had lived, a hero.

Inspired by this young martyr to become a priest himself, Father McKenzie spent ten years researching and writing José's story. The result is a riveting tale of a young man's bravery and passion for God. Drawing on all existing sources, including never-before-seen documents from the Vatican and the Mexican Government, Saint José plunges the young reader into a country at war, not over territory, but over the right to worship God freely.

Canonized in 2016 by Pope Francis, St. José is one of the newest and youngest saints of the Catholic Church, and an inspiration to people from all walks of life. He shows us that our faith is worth fighting and dying for. His example is a powerful catalyst for young people today, so many of whom are tempted to never commit themselves to any serious calling in life.

A new title in the acclaimed Vision Books lives of the saints series for youth 9-15 yrs.

MSRP:
Now: $9.95
Was:
A fantastic activity book that also teaches kids about our heroes, the saints! A mini-story or bio is included for each saint featured here – kids will read the story and choose the sticker that fits...

MSRP:
Now: $84.95
Was:
This image of St. Joseph holding the Child Jesus by the hand is a beautiful gift for any father. Saint Joseph holds the lily in his hand as a sign of his perpetual purity, which blossomed when he was...

MSRP:
Now: $24.95
Was:
A quality book cover that is sure to protect your missal or bible for many years to come… and inspire devotion! This cover features a beautiful embroidery of the powerful Saint Benedict...

MSRP:
Now: $8.00 - $40.00
Was:
The 2022 Advent Calendar is designed by the Sisters MICM and printed at our monastery to help you make a profitable season of Advent, by offering prayers, spiritual exercises and penances in...

MSRP:
Now: $12.00
Was:
The 2023 Traditional Calendar of Saints features artistic renditions of exquisite paintings from churches in Italy. Liturgical prayers and verses coincide with the images for each month, and are sure...

MSRP:
Now: $24.95
Was:
A quality missal / bible cover machine embroidered by the Sisters with the words: Adoro Te Devote (I Devoutly Adore You) and the symbol of a monstrance. This cover features a custom zipper pull,...

MSRP:
Now: $16.95
Was:
In this charming sequel to his bestselling book, Our Lady’s Wardrobe, Anthony DeStefano introduces Catholic children to more well-known images of the Blessed Virgin Mary. Only this time,...

MSRP:
Now: $16.95
Was:
This delightful rhyming book introduces Catholic children to the Blessed Virgin Mary in a fun and simple way—through her clothes! When Our Lady lived in Nazareth two thousand years ago, she...

MSRP:
Now: $24.95
Was: $35.00
While supplies last! This timeless wall tapestry is a woven rendition of "The Last Supper," the famous painting by Leonardo da Vinci. The image depicts the Last Supper when Christ instituted...

MSRP:
Now: $29.95
Was:
This unique denim apron features an embossed cross and the battle cry of the Cristeros and loyal Catholics through the ages: Viva Cristo Rey (Long Live Christ the King.) It is a message for...

MSRP:
Now: $13.95
Was:
An exclusive mug designed by our Sisters MICM for the year of Saint Joseph! A beautiful image of Saint Joseph with the Christ Child who holds the staff of lilies symbolic of Saint Joseph's purity...