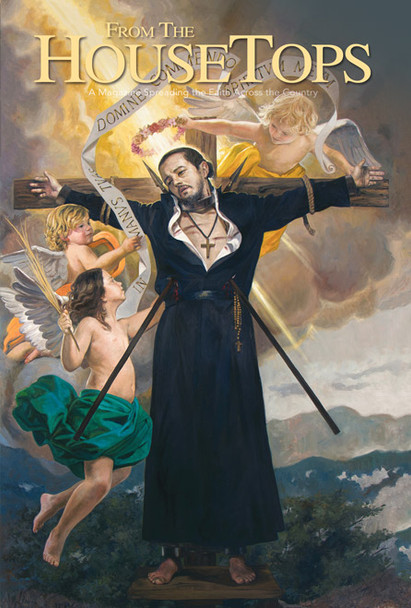 The story of Paul Miki and the Japanese martyrs is the story of twenty-six uncompromising heroes of the Faith who gave their lives for preaching the Gospel of Christ. What was designed to be a terror tactic by the government turned out to be one of the most notable scenes of martyrdom throughout the centuries, planting the seed of Faith deep into the heart of the Japanese people.

The unique painting by Raúl Berzosa on the cover depicts Saint Paul Miki at the moment of his final sacrifice. This customary Japanese crucifixion shows Paul bound with iron rings, hand, foot, and neck, and transfixed with lances. Angels crown him as a martyr and surround the scene with a banner with the Latin words: “Into thy hands, O Lord, I commend my spirit.”

MSRP:
Now: $12.95
Was:
This Vision Book for youth 9-15 years old tells the exciting, inspirational story of the great French saint of charity, St. Vincent de Paul. From his days of youth as a shepherd boy to his slavery in...

MSRP:
Now: $12.95
Was:
The inspirational story of St. José Sánchez del Río, a 14 yr. old boy in Mexico who died a martyr for the Catholic faith during the Cristero War in the 1920s. Meet young José and his friend Trino as...

MSRP:
Now: $4.95
Was:
This is the story of a Japanese medical doctor who, having converted from Shintoism to Catholicism, set a heroic example to his city and nation after surviving the atomic bombing of Nagasaki. His...

MSRP:
Now: $4.95
Was:
This is the story of one Ignatius Cardinal Kung, Modern Confessor of the Faith, the first Chinese Bishop of Shanghai and one of the Church's staunchest leaders in time of persecution. Unyielding to...