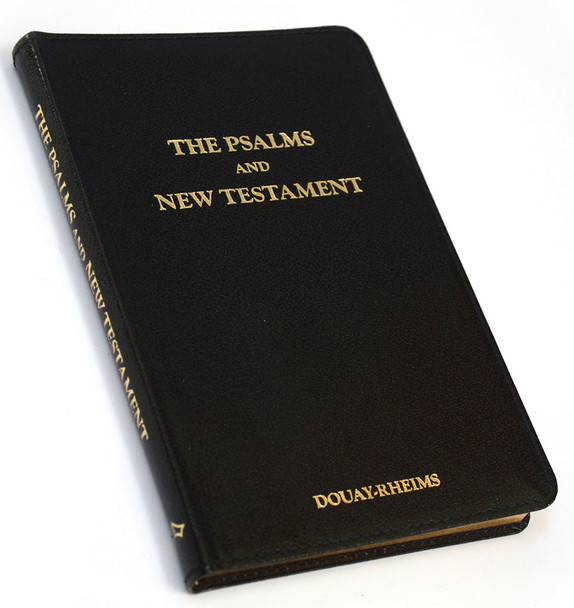 Ideal for those wanting to carry the New Testament and Psalms at all times for meditation and prayer. This handy volume will easily fit into a shirt pocket or handbag.

It uses the same solid Douay-Rheims translation of the New Testament and Psalms as our Bible, and is well organized for prayerful meditation, excellent for evangelism and a great portable gift for graduates and friends alike.

In 1546, the Council of Trent declared the Latin Vulgate Bible as authentic, and declared that "No one (may) dare or presume under any pretext whatsoever to reject it" (4th Session, April 8, 1546). The Douay-Rheims Bible is an English translation of the Latin Vulgate Bible, a version universally used in the Church for over 1500 years, itself meticulously translated from the original Hebrew and Greek by St. Jerome (A.D. 340-420).

The Douay-Rheims was completed in 1609, and is therefore older than the King James Version, the oldest Protestant translation still in use, which was published in 1611. The Rheims New Testament was published nearly thirty years earlier, in 1582. Further, the translators of the KJV make specific reference to the Douay version in their translators' preface. It is commonly acknowledged that, in preparing the KJV, the translators made use of the Rheims New Testament and adopted many of its readings in preference to those of other English editions.

Since it was translated quite literally and with great reverence for each individual word from the Vulgate, which in turn reflects the structure of the original languages very clearly, the Douay-Rheims Bible can give great insight into the minds of the sacred authors.

In 1749-1752, Bishop Challoner, knowing that many English Catholics were reading distorted Protestant versions of the Bible such as the King James Version (KJV), made major revisions to the Douay-Rheims version, to improve its readability without diminishing its accuracy. The notes, written by Bishop Challoner are entirely faithful to the teachings of the Holy Catholic Church. The revised Douay-Rheims Bible has been approved by the Church many times over, including the approbation of Cardinal Gibbons for the 1899 edition that Baronius Press is publishing.

For over 300 years, the Douay Rheims Bible was the only Catholic English translation of Scripture used. It continues to be used officially in Catholic churches today.

Renew Subscription to "From the Housetops"

MSRP:
Now: $15.00 - $35.00
Was:
Renew Subscription We know you want to nourish your soul and mind, and one of the best ways to do this is to read great Catholic content. Books, stories, and spiritual reflections have been...

The Most Holy Rosary of the Blessed Virgin Mary

MSRP:
Now: $12.95
Was:
Now you can make your next traffic jam an occasion of grace! In this exclusive audio CD presentation, the recitation of the Traditional fifteen-decade Rosary is accompanied by subtle orchestral music...

MSRP:
Now: $23.95
Was:
Considered by many to be the greatest single book of Marian spirituality ever written, True Devotion to Mary, is St Louis de Montfort's classic statement on the spiritual way to Jesus Christ though...

MSRP:
Now: $14.95
Was:
Salvation and spiritual perfection should not be sought haphazardly; a strategy is needed to win the battle for our souls. The Spiritual Combat, first published in 1589, provides timeless guidance...

MSRP:
Now: $8.50
Was:
This little book is intended to help husbands and fathers of a family to harmoniously manage the home together with his wife, acting as a guide and support in the very difficult task of rearing...