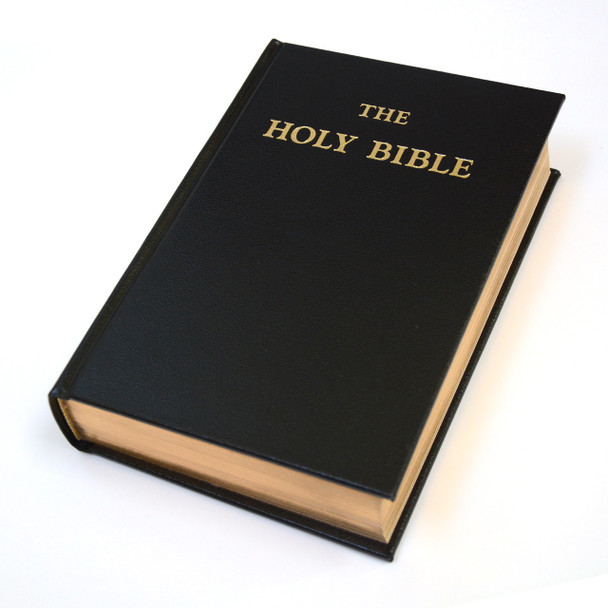 In 1546, the Council of Trent declared the Latin Vulgate Bible as authentic, and declared that "No one (may) dare or presume under any pretext whatsoever to reject it" (4th Session, April 8, 1546). The Douay-Rheims Bible is an English translation of the Latin Vulgate Bible, a version universally used in the Church for over 1500 years, itself meticulously translated from the original Hebrew and Greek by St. Jerome (A.D. 340-420).

The Douay-Rheims was completed in 1609, and is therefore older than the King James Version, the oldest Protestant translation still in use, which was published in 1611. The Rheims New Testament was published nearly thirty years earlier, in 1582. Further, the translators of the KJV make specific reference to the Douay version in their translators' preface. It is commonly acknowledged that, in preparing the KJV, the translators made use of the Rheims New Testament and adopted many of its readings in preference to those of other English editions.

Since it was translated quite literally and with great reverence for each individual word from the Vulgate, which in turn reflects the structure of the original languages very clearly, the Douay-Rheims Bible can give great insight into the minds of the sacred authors.

In 1749-1752, Bishop Challoner, knowing that many English Catholics were reading distorted Protestant versions of the Bible such as the King James Version (KJV), made major revisions to the Douay-Rheims version, to improve its readability without diminishing its accuracy. The notes, written by Bishop Challoner are entirely faithful to the teachings of the Holy Catholic Church. The revised Douay-Rheims Bible has been approved by the Church many times over, including the approbation of Cardinal Gibbons for the 1899 edition that Baronius Press is publishing.

For over 300 years, the Douay Rheims Bible was the only Catholic English translation of Scripture used. It continues to be used officially in Catholic churches today.

Devotion to the Holy Face

MSRP:
Now: $4.95
Was:
Devotion to the Holy Face — Compiled by Mary Frances Lester Our Lord expressed His desire that this devotion should be known and practiced in reparation for man’s blasphemy.  It has become...

MSRP:
Now: $39.95
Was:
This ornate Crucifix holy water font is completely hand-painted. A slight antique coloring gives it an heirloom look. Beautiful in every detail! Font is 6.75”; Hand-painted resin

MSRP:
Now: $16.99
Was:
This intriguing and fun book investigates 12 mysterious, inexplicable cases that have happened in the history of the Catholic faith, some of which still continue to happen or remain today. These...

MSRP:
Now: $15.95
Was:
Help teach your child about the greatest and most important book, the Holy Scripture, with this fully illustrated introduction to the most important bible stories! This book can be passed down for...

The Infant of Prague

MSRP:
Now: $4.95
Was:
Holy statues of Our Lord, Our Lady and the saints have been part of Catholic for centuries! The most commonly identified is the Infant of Prague, which depicted the Child Jesus as an Infant King. The...

The Church of Salvation

MSRP:
Now: $10.95
Was:
A collection of authoritative quotes and writings from approved sources that verify the Roman Catholic Church's unique role in salvation. By Brother Leonard Mary, MICM. Paperback.

MSRP:
Now: $59.95
Was:
This ring is for anyone devoted to the Blessed Virgin Mary, our Blessed Mother. For those who have made their Consecration to Mary as set forth by Saint Louis Marie de Montfort in his treatise...

MSRP:
Now: $3.00
Was:
Thoughts on the "De Montfort Way" and the spirit of True Devotion to Mary written by Frank Duff, the founder of the Legion of Mary. Paperback; 37 pages.

MSRP:
Now: $59.95
Was:
Woman’s ring: This ring is for anyone devoted to the Blessed Virgin Mary, our Blessed Mother. For those who have made their Consecration to Mary as set forth by Saint Louis Marie de Montfort...