The Letters of St. Thérèse of Lisieux, vol. 2 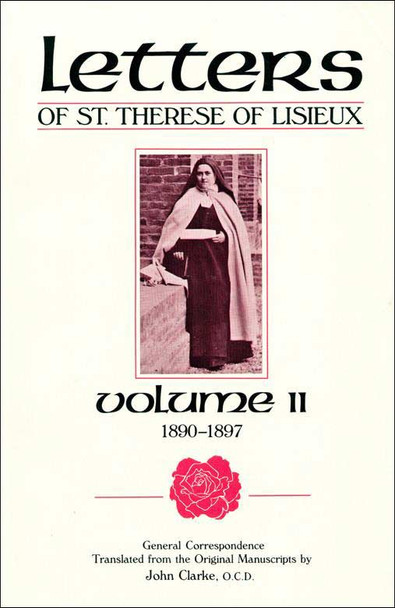 The Letters of St. Thérèse of Lisieux, vol. 2

The Letters of St. Thérèse of Lisieux and Those Who Knew Her. General Correspondence, vol. 2

This sequel to volume 1 contains all of Thérèse's letters from the end of September 1890 (during her novitiate) until her death in 1897, as well as many letters written to or about her. Here the mature Saint Thérèse shows the path of her growth as a religious and as a deep spiritual writer. The reader learns much about all of her correspondents, including her two "missionary brothers," and gains familiarity with the development of her thought and message. Fifty pages of complementary documents give us useful tools for studying the texts.

Translated from the critical edition by John Clarke, OCD. Includes 4 pages of facsimiles of Thérèse's letters, plus general and biblical index to both volumes.

MSRP:
Now: $28.95
Was:
Designed and machine embroidered by the Sisters, Slaves of the immaculate Heart of Mary, this cotton canvas tote is perfect for carrying heavy items. This lovely embroidery of a rose and the words...

MSRP:
Now: $17.95
Was:
In this colorful and vibrant graphic novel, St. Thérèse of Lisieux reveals to children the story of her soul and her secret to holiness: “To love is to give everything and to give yourself.”...

Saint Therese and the Roses

MSRP:
Now: $12.95
Was:
The beautiful story about the most popular saint of modern times, St. Therese of Lisieux, the "Little Flower." Growing up in Lisieux, France was occasionally painful but usually delightful for...

MSRP:
Now: $58.95
Was:
Unique clothed figurine-statue of Saint Therese of Lisieux, the Little Flower of Jesus, in her Carmelite habit. She holds the Crucifix and the roses that she promised she would let fall from Heaven...

MSRP:
Now: $4.95
Was:
This astounding story of conversion and sanctity is an encouraging example to those discouraged and seemingly hopelessly addicted to bad habits. It shows that nothing is beyond God's intervention...

MSRP:
Now: $14.95
Was:
"Listen, Father Jerzy, today is September 14, your birthday. So if you are supposed to do something, this is the day!" So prayed Father Bernard Brien beside the bed of a dying man. As soon as the...

MSRP:
Now: $19.95
Was:
These imitation hematite beads are hand crafted with a silver chalice as the centerpiece. They make a perfect gift for any First Communicant.

MSRP:
Now: $12.95
Was:
Send a Catholic greeting to everyone you know! This lovely collection of greeting cards features unique images of the Blessed Mother taken from antique holy cards and vintage artwork. Sets include...

MSRP:
Now: $42.95
Was:
Invite Our Lady to have a place in your kitchen! This statue is a wonderful way to remember Mary’s presence and loving care throughout your home. Exquisitely painted, with soft colors...

MSRP:
Now: $4.95
Was:
Saint John de Brebeuf, a professed Jesuit of towering stature, left his comfortable surroundings in France to evangelize the "Children of the Forest" in North America. His mission was urgent, his...

Our Lady of Perpetual Help Tapestry

MSRP:
Now: $14.95
Was:
This unique tapestry rendering of the powerful image known as Our Lady of Perpetual Help is elegant and yet, the perfect size to fit anywhere in your home or office! Designed by the Sisters, Slaves...