Louis and Zélie: The Holy Parents of Saint Thérèse 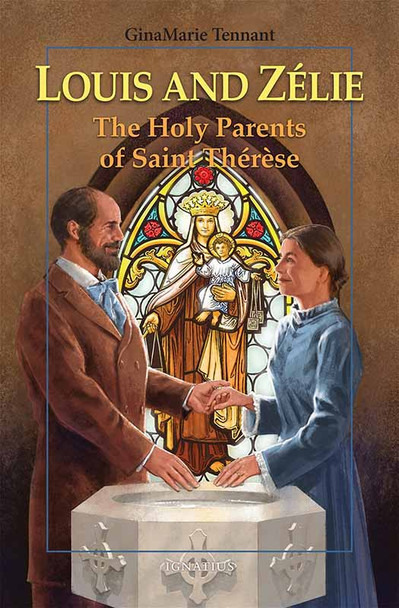 Louis and Zélie: The Holy Parents of Saint Thérèse

Louis and Zélie Martin, the parents of Saint Thérèse of Lisieux, were the first married couple ever canonized together by the Catholic Church. This inspiring story begins in their childhoods and follows them through their joys as well as their sorrows.

Louis, the son of a French army officer, had desired to be a priest. Instead he became a watchmaker, happy to remain single in service of God and neighbor. Zélie had thought about becoming a religious sister, but she became an expert lace maker and started her own company, doubtful she would ever marry. Then one day they passed each other on a bridge . . .

The Martins married and welcomed nine children, five of whom lived to adulthood and became religious sisters. Their household was full of love, which extended, sometimes heroically, to many others outside their family, including the needy and the enemy soldiers quartered in their home during the Franco-Prussian War.

The secret to their unfailing love was their boundless faith in God. All the challenges the Martins faced, great and small, were met with a profound trust in Divine Providence.

MSRP:
Now: $3.99
Was:
Everyone loves Saint Thérèse, the Little Flower! Her patronage extends to travelers specifically, including aviators, aircrews and missionaries, and she has wonderful advice for travelers: “I...

MSRP:
Now: $14.95
Was:
Mornings with Saint Therese is a compilation of 120 daily readings which are short excerpts (no more than 1-3 pages) taken from the Little Flower's writings and also from those of her close family...

Saint Therese and the Roses

MSRP:
Now: $12.95
Was:
The beautiful story about the most popular saint of modern times, St. Therese of Lisieux, the "Little Flower." Growing up in Lisieux, France was occasionally painful but usually delightful for...

MSRP:
Now: $58.95
Was:
Unique clothed figurine-statue of Saint Therese of Lisieux, the Little Flower of Jesus, in her Carmelite habit. She holds the Crucifix and the roses that she promised she would let fall from Heaven...

MSRP:
Now: $59.95
Was:
Woman’s ring: This ring is for anyone devoted to the Blessed Virgin Mary, our Blessed Mother. For those who have made their Consecration to Mary as set forth by Saint Louis Marie de Montfort...

MSRP:
Now: $13.95
Was:
This mug features a unique painting of Our Lady of Total Consecration. Mary holds her immaculate Heart out to us as well as the chains of holy slavery to Jesus through Mary. On the reverse side is...

MSRP:
Now: $66.95
Was:
Exclusively from our monastery, you can now show your special devotion with the iconic symbol of the Carmelite Order onto this comfortable vest! 100% polyester sweater fleece brushed on the inside...

MSRP:
Now: $6.00
Was:
A vintage "Credo" image illustrates these unique Catholic notecards! The clean artwork and sepia tones of this image are rivaled by the beautiful symbolism of the word "Credo" (I believe) enclosing...

MSRP:
Now: $23.95
Was:
Considered by many to be the greatest single book of Marian spirituality ever written, True Devotion to Mary, is St Louis de Montfort's classic statement on the spiritual way to Jesus Christ though...

MSRP:
Now: $79.95
Was:
The symbolism of this sterling silver bracelet indicates that the wearer has made the Total Consecration to Mary through the formula set forth by St. Louis Marie de Montfort in "True Devotion...