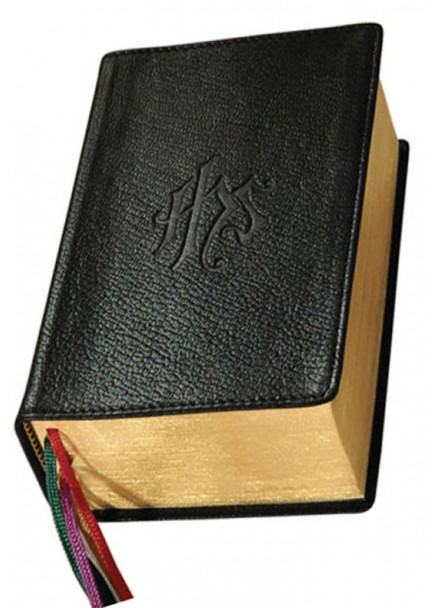 The “1962 Daily Missal” contains the English translations and the Latin originals of the rites and texts for Holy Mass and many other liturgical ceremonies that were attended by the vast majority of Roman Catholics in the centuries before the liturgical reforms of Vatican Council II took effect. The liturgy of the 1962 Daily Missal is better known as the “Tridentine Mass”, “Traditional Latin Rite” or “Traditional Roman Rite” and since 2007 as the “Extraordinary Form of the Roman Rite”.

With its splendid texts and ceremonies that orient both priest and people entirely to the worship of God, this form of the sacred liturgy has fostered a living faith that has produced numerous saints and inspired countless artists, writers and thinkers to create much of what we now know as Western culture. Thanks to Pope Benedict XVI’s Apostolic Letter “Summorum Pontificum” in 2007, this form of the liturgy is now being celebrated more regularly and freely.

Features of the 1962 Daily Missal:

Our Lady of the Rosary

MSRP:
Now: $74.95
Was:
The Rosary is an intrinsic devotion that Saint Louis de Montfort encourages his followers to pray. This hand painted statue is a perfect devotional piece to focus on while saying the family Rosary...

MSRP:
Now: $9.95
Was:
Saint Joseph the Worker gained his sanctity through his holy life as a carpenter. This unique ceramic mug is a daily reminder for the Catholic working man. Carpentry tools adorn this...

MSRP:
Now: $9.95
Was:
Saint Gianna Molla, a modern day saint who was a wife, mother and doctor and pro-life patron, adorns this lovely ceramic mug. On the reverse is a quote by Saint Gianna: "One earns Paradise with one's...

MSRP:
Now: $13.95
Was:
A wonderful children’s Missal for attendance at the Latin Tridentine Mass, in Latin and English. Large print, sturdy construction, and color illustrations make it a great missal for children...

MSRP:
Now: $13.95
Was:
A wonderful children’s Missal for attendance at the Latin Tridentine Mass, in Latin and English. Large print, sturdy construction, and color illustrations make it a great missal for children...

MSRP:
Now: $54.95
Was:
This ring is for anyone devoted to the Blessed Virgin Mary, our Blessed Mother. For those who have made their Consecration to Mary as set forth by Saint Louis Marie de Montfort in his treatise...

MSRP:
Now: $32.95
Was:
Like the councils to young men, these were originally delivered in a series of conferences to "Girls in the Ordinary Walks of Life and In Particular, for the Children of Mary." The first part is...

MSRP:
Now: $54.95
Was:
Woman’s ring: This ring is for anyone devoted to the Blessed Virgin Mary, our Blessed Mother. For those who have made their Consecration to Mary as set forth by Saint Louis Marie de Montfort...

MSRP:
Now: $22.95
Was:
Considered by many to be the greatest single book of Marian spirituality ever written, True Devotion to Mary, is St Louis de Montfort's classic statement on the spiritual way to Jesus Christ though...

MSRP:
Now: $32.95
Was:
This classic received the blessing (as did the Young Girls Guide) of Pope Pius XI in 1927 when it was first printed. This famous prayerbook contains the text of the Ordinary of the Mass in Latin and...

MSRP:
Now: $3.00
Was:
Thoughts on the "De Montfort Way" and the spirit of True Devotion to Mary written by Frank Duff, the founder of the Legion of Mary. Paperback; 37 pages.