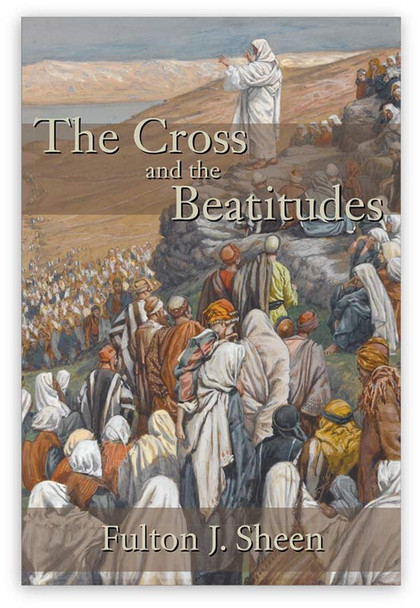 Fulton J. Sheen was remarkable in his ability to uncover many layers of meaning in the life and words of Jesus of Nazareth. The Seven Beatitudes and The Seven Words from the Cross—both were delivered from a mountain, but the connection runs deeper than that.

As Bishop Sheen points out, Our Lord began His Public Life on the Mount of the Beatitudes and closed it on the Mount of Calvary. On the first He uttered the words central to His message; on the second He spoke to the deed central to His mission. Two avenues were thereby opened: one for spreading the Good News throughout the world, the other for reconciling all men to God through Christ.

Fulton Sheen’s profound meditations will slake the spiritual thirst of all who desire a fuller understanding of the Gospels and seek to draw closer to Christ.

The Letter to the Friends of the Cross

MSRP:
Now: $6.95
Was:
In this Letter St. Louis de Montfort manifests his passionate love for the Cross and pours forth noble sentiments of his ardent soul. Like St. Paul, he is “determined to know nothing...except Jesus...

Out of the Cross

MSRP:
Now: $9.95
Was:
The stories of the 108 Polish Martyrs of World War II ~ for the first time in English! The descriptions of the martyrs are small glimpses of these holy individuals. As you read these accounts of the...

The Stations of the Cross (Hardcover)

MSRP:
Now: $17.95
Was:
An exquisite hardcover book that is both beautiful and spiritually fruitful! The timeless "Stations of the Cross" according to Saint Alphonse's Ligouri embellished with large, full-color...

The Seven Words of Jesus and Mary

MSRP:
Now: $6.95
Was:
Fulton J. Sheen turned his voice and pen to many subjects during the course of a long and remarkable apostolate. But nothing was closer to the heart of his message than bringing the words of Our Lord...

MSRP:
Now: $10.00
Was:
"The Narrow Way," by Rev. Peter Geiermann, CSSR, is a manual of the spiritual life for all of good will. It is intended to serve as a handbook for intelligent and devout Catholics in the world and as...

A Glimpse Beyond the Veil, The Art of Matthew Brooks

MSRP:
Now: $4.95
Was: $5.95
Religious Art Book Containing over 35 color plates & several black & white drawings. Each color plate has accompanying prayer or bible quotation together with comments from the artist. All...

Devotion to the Holy Face

MSRP:
Now: $4.95
Was:
Devotion to the Holy Face — Compiled by Mary Frances Lester Our Lord expressed His desire that this devotion should be known and practiced in reparation for man’s blasphemy. ...

My Imitation of Christ

MSRP:
Now: $11.95
Was:
The Imitation of Christ by Thomas a Kempis has been the most popular book, second only to Sacred Scripture, for the last five centuries. It presents the fundamental principles of the...

MSRP:
Now: $9.95
Was:
Bread of Life is a book comprising a series of lectures by Father Leonard Feeney, MICM., founder of the Slaves of the Immaculate Heart of Mary. Many spiritual writers have written on the Holy...