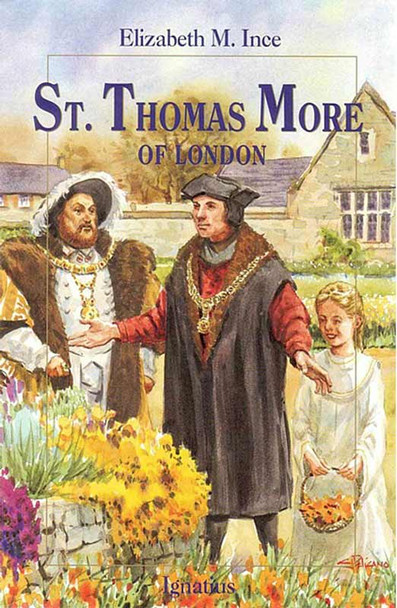 This wonderful book for young readers presents the remarkable life of the great English martyr, St. Thomas More, in an engaging and easy-to-read style. St. Thomas More, the light-hearted but heroic Chancellor of England, comes to life in this biography by Elizabeth M. Ince. Raised in the London of the late 1400's, Thomas was a bright student eager for knowledge. When serving as a page for Cardinal Morton, the Archbishop of Canterbury noticed Thomas' bright wit and sent him to Oxford. There young Thomas became a scholar of great repute, and later one of the greatest lawyers that Englad had ever seen. Going on to serve his King, Thomas More soon became one of Henry VIII's most trusted advisors. But then the unthinkable happened. King Henry VIII defied Rome and set himself up as the head of the Church in England, commanding all of his subjects to acknowledge him as such. Sir Thomas resigned as Chancellor rather than betray his faith, but his defiance came at a price. King Henry soon had him arrested and charged with treason. On July 6, 1535, Sir Thomas More was beheaded for high treason and became a martyr for the Church. "A series which should be found wherever there are young Catholic readers." - Ave Maria "The Vision Books are splendid in design and format." - Catholic Standard Times "The entire series of Vision Books is recommended for solid training for youth." - The Tablet

MSRP:
Now: $11.95
Was:
Saint Thomas More, pray for us! Adorn a shelf, mantle, or bedside table with this beautiful, high-quality, glossy wood arched desk plaque. Comes with an easel back and hanging hook. 4”x 6.5”

MSRP:
Now: $4.95
Was:
Saint Vincent Ferrer thundered warnings of final judgement in the fourteen hundreds to a world filled with confusion and sin, in an age not unlike our own present time. This saint proved that only...

MSRP:
Now: $11.95
Was:
Saint Thomas More, pray for us! Adorn a shelf, mantle, or bedside table with this beautiful, high-quality, glossy wood arched desk plaque. Comes with an easel back and hanging hook. 4”x 6...

MSRP:
Now: $4.95
Was:
Saint John Bosco was a revolutionary in the field of Education. This pedegogue revamped the system of his era with a timeless system based on joy and kindness. His unique life, dreams and prophecies...

MSRP:
Now: $14.95
Was:
Marigold Hunt, continues the tale of Jesus and His Church by retelling for children the events reported in The Acts of the Apostles, St. Luke's account of the dangerous early days of the Church...

MSRP:
Now: $4.95
Was:
A beautifully illustrated explanation of the Apostles' Creed for your child, presented simple terms. An ideal gift for every occasion. From a collection of books for children. Sold separately...

MSRP:
Now: $4.95
Was:
Saint Maximilian Kolbe lived only 47 years. His courageous endeavors to counteract evil and to save souls was rivaled only by his indomitable courage in the face of death. This strength he received...

MSRP:
Now: $9.95
Was:
A fantastic activity book that also teaches kids about our heroes, the saints! A mini-story or bio is included for each saint featured here – kids will read the story and choose the sticker...

MSRP:
Now: $4.95
Was:
"The life of Peter Julian Eymard, the standard-bearer, herald and champion of Christ's presence, in the sacred tabernacle, is, like that of the Baptist, a shining and burning light…through...