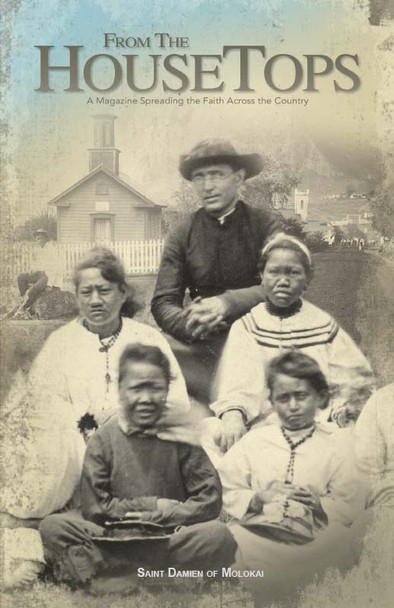 This is the story of a priest, who instead of fleeing sickness to preserve his own health, rather gave his life for those suffering from an incurable sickness, feared by all; leprosy. Spending the best years of his life on Molokai, servicing the colony of banished lepers, he, himself succumbed to the ravages of the disease at the age of forty-six.

On the cover we see the intrepid missionary Father Damien with members of his parish choir. Behind him is seen one of the churches he built on the island of Molokai where he ultimately sacrificed  his life for the salvation of the souls of the lepers exiled there.

Saint Damien and the Bells

MSRP:
Now: $12.95
Was:
The story of the saintly Father Damien, who in 1872 went to the island of Molokai, where lepers had been exiled to live in miserable surroundings. Damien earned the trust of the lepers, and his...

MSRP:
Now: $4.95
Was:
Saint Francis' story is the charming tale of a rich and unsatisfied noble with shallow goals of glory, who discovers a dramatic fulfillment in rejection of these values. Instead he pursues a life of...

Our Lady of Good Counsel

MSRP:
Now: $4.95
Was:
The enchanting story of the miraculous fresco of Our Lady of Good Counsel. The ancient painting, by an unknown artist, is a tender depiction of the Son of God embracing His Blessed Mother...