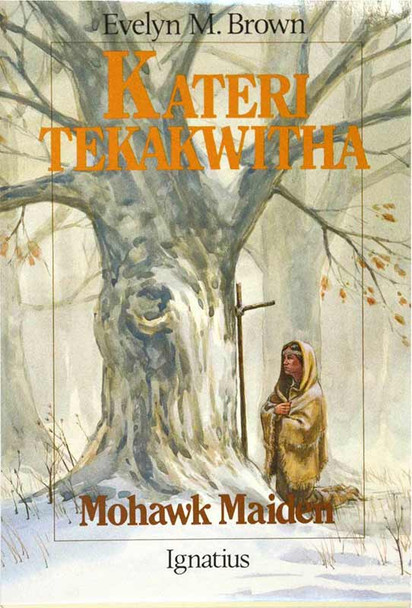 This is the inspiring story of Blessed Kateri Tekakwitha, a holy young Indian woman who was converted to Christianity by the French missionaries led by Saint Isaac Joques during the 1600s.
Kateri's mother was a very devout Christian woman who, after being captured by the Iroquois, was not allowed to baptize her daughter. Kateri's whole family died of smallpox, and she was adopted by a chief who was very anti-Christian. When she was baptized and converted by the missionaries, Kateri became ostracized from the tribe. With the help of the priest, she made a daring escape, and thereafter lived a life devoted to God. Denied her desire to become a nun, she declined marriage and lived as a single woman with deep faith, offering her sufferings and life to Christ. She died at the age of twenty-four and is affectionately known as the "Lily of the Mohawks." Kateri was recently beatified by Pope John Paul II.

MSRP:
Now: $14.95
Was:
The glorious stories of the saints! Every story teaches a truth of the Catholic Faith and listeners get to know saints who set inspiring examples for youngsters to emulate in their early walk of...

MSRP:
Now: $60.95
Was:
This gorgeous 8" handpainted statue of Saint Kateri Tekakwitha, the Lily of the Mohawks, is lifelike and inspiring in all her mohawk splendor. Indoor / Outdoor. Gift boxed.

MSRP:
Now: $65.95
Was:
This lovely Saint Kateri Tekakwitha Hand-Painted Resin Holy Water Font stands 7.5" H and is a lovely addition to any Catholic home.The beautifully crafted depiction of the Lily of the Mohawks is...

MSRP:
Now: $58.95
Was:
A unique figurine-statue of Saint Kateri Tekakwitha, the Lily of the Mohawks. Kateri stands in her imitation suede Mohawk dress and holds in her hands a cross made from twigs. She has an amazing...

MSRP:
Now: $29.95
Was:
This icon of Saint Kateri Tekakwitha depicts the "Lily of the Mohawks" dressed a white tunic, symbolic of her purity and embracing the cross. Over her shoulders in the covering she would often wear...

MSRP:
Now: $15.95
Was:
A prayer book for young Catholics. Useful instruction for Communion and Confirmation and a large selection of devotions and prayers. Truly a beautiful little book. Paperback; illustrated. Available...

MSRP:
Now: $11.98
Was:
A full color, hardcover book featuring 60 of the world's most popular Catholic Saints. The book, exquisitely illustrated by Michael Adams, is conveniently arranged in the order of the Saint's feast...

MSRP:
Now: $56.95
Was:
This large 1.25" sterling silver Four-Way Medal, containing images of the Sacred Heart, Saint Joseph, Saint Christopher and the Miraculous Medal joined in the center with the Holy Ghost, is...

Leading Little Ones to Mary

MSRP:
Now: $6.95
Was:
This reader instills a genuine devotion to Mary in the little ones. Sixteen chapters to be read every other day to allow the child to reflect on the devotion. This book is meant to be read by parents...