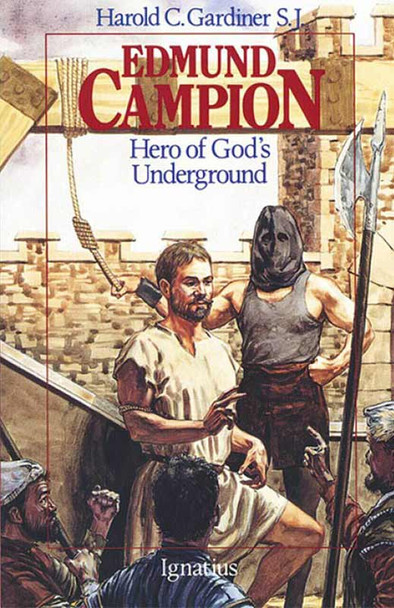 From the famous Vision Books series of lives of saints for young people, this is the inspiring dramatic account of the colorful and courageous life and death of the martyr, St. Edmund Campion, "hero of God's underground" during the persecutions of the Catholics in England in the 1500s.

Campion, the most celebrated young scholar of his day, was on his way to becoming the Archbishop of Canterbury until a crisis of conscience turned him back to his Catholic faith. He fled England, became a Jesuit priest, and was sent back to be the leader of the underground ministry to the persecuted Catholics until, after a long and frustrated search, the government finally captured him and brutally executed him. His daring and brilliant underground ministry to Catholics all over England, his zeal for the faith, and his great courage and joy in the face of martyrdom are all related in this compelling story for youth.

Saint Benedict: Hero of the Hills

MSRP:
Now: $12.95
Was:
Mary Fabyan Windeatt presents the powerful story of the famous life and miracles of St. Benedict for the Vision Book series of saints for youth. Known as the Father of Western Monasticism, St...

MSRP:
Now: $17.95
Was:
Evelyn Waugh presented his biography of St. Edmund Campion, the Elizabethan poet, scholar and gentleman who became the haunted, trapped and murdered priest as "a simple, perfectly true story of...

MSRP:
Now: $12.95
Was:
This Vision book for youth 9 - 15 years old tells the thrilling story of one of America's greatest missionaries who came down from Canada with explorer Louis Joliet to explore the mighty Mississippi...

MSRP:
Now: $14.95
Was:
By Henry Garnett In this story, set in 1585 England, the author tells the tale of a supposed group of “priest hunters” and an armed resistance of Catholic people. The main character...

MSRP:
Now: $4.95
Was:
This is the story of a Japanese medical doctor who, having converted from Shintoism to Catholicism, set a heroic example to his city and nation after surviving the atomic bombing of Nagasaki. His...

MSRP:
Now: $4.99
Was:
For the sake of His sorrowful Passion, have mercy on us and on the whole world! This unique Divine Mercy decal displayed on your vehicle is sure to inspire other drivers with the message of...

Catholic Tales for Boys and Girls

MSRP:
Now: $10.95
Was:
Here are twelve of Caryll Houselander's best tales, charmingly illustrated with Renée George's lively drawings of pirates and princesses, castles and kings. Through the tale of Jack and Jim,...