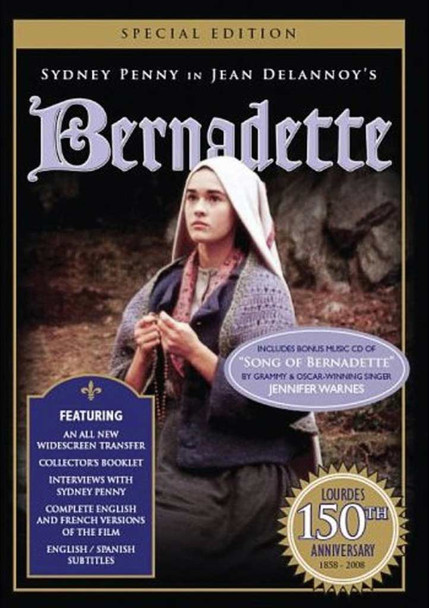 From Jean Delannoy, one of France’s foremost filmmakers, comes this top quality feature film production of the story of St. Bernadette and the apparitions of Our Lady of Lourdes. Actress Sydney Penny gives a beautiful performance as Bernadette, and the rest of the cast is equally superb. Also stars Roland Lesaffre and Michele Simonnet. It is highly recommended by the Vatican as a “sensitive portrayal of a very moving story that deserves a wide audience.”

Shot on location in France with outstanding cinematography and a beautiful music score, this is the film that was chosen to be shown daily at the shrine in Lourdes.

This movie is Not Rated

Bernadette: The Princess of Lourdes (DVD)

MSRP:
Now: $14.95
Was:
The story of Saint Bernadette Soubirous, the visionary of Lourdes, told for children. Saint Bernadette had a delightful personality, which comes out in her brave and often humorous words. While...

MSRP:
Now: $14.95
Was:
This quality pewter medal of Saint Bernadette on a chain includes a beautiful story card of the young visionary of Lourdes! The genuine pewter medal has a beautifully-detailed image of 'Saint...

Bernadette: The Princess of Lourdes (DVD)

An Introduction to the Devout Life

MSRP:
Now: $14.95
Was:
As no sensible person would make a long road trip without first consulting a map, so the person intent upon gaining Heaven should first resort to a competent guide to reach that Goal of all goals...

MSRP:
Now: $14.95
Was:
This beautiful set of guardian angel crib medal and quality crucifix is the perfect gift for the new member of the family!  Available in pink and blue.

MSRP:
Now: $4.95
Was:
A modern hero, this Polish priest was just beatified in 2010. During the time of the Solidarity movement, Jerzy inspired and supported the faithful in their struggle for freedom and counseled them to...

MSRP:
Now: $4.95
Was:
The story of Bartolo Luongo is the fascinating journey of a once dedicated Catholic, who, falling from grace, became involved in the occult. With the help of friends, priest and laymen, he...

Book of Saints for Catholic Children

MSRP:
Now: $12.95
Was:
This wonderful  hardcover book includes 96 stories of favorite saints along with classic art illustrations from Bonella Italia. Children love the stories of the Saints! Give them good spiritual...