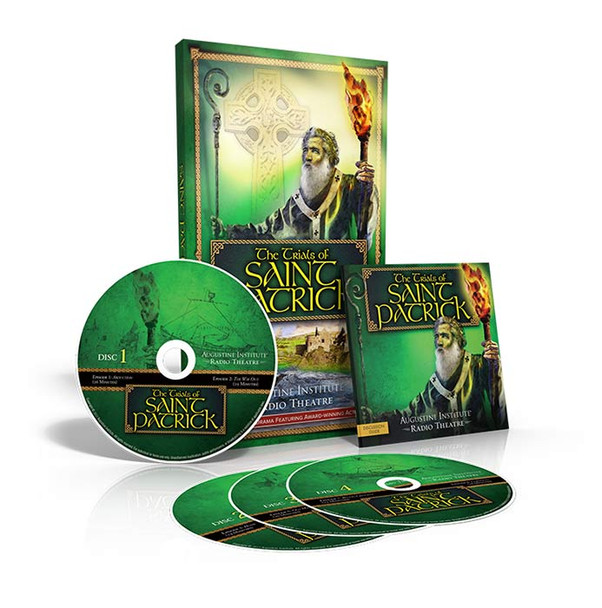 The Trials of Saint Patrick is the epic story of one man’s spiritual odyssey through hardship, loss, mercy, and forgiveness. Dramatized with a fresh boldness by the Augustine Institute Radio Theatre, the characters will come alive through the talents of dozens of accomplished, award-winning actors, combined with cinematic sound effects and music. Your imagination will be quickened. Your heart will be inspired.

Patricius of Britain was the privileged son of a Roman official. At the age of sixteen, he was suddenly taken and enslaved by foreign pirates from Hibernia—a land now known as Ireland. For six years the newly named Patrick suffered at the hands of cruel masters and was abandoned to isolation as a shepherd. He endured the extreme weather, starvation, and loneliness. Yet, in the midst of these trials, God was preparing Patrick to evangelize a nation.

This 4-CD set includes a twenty-four page discussion guide that will help you discuss major concepts and themes from this unforgettable audio drama. Perfect for in the car, at home, and on the go, this audio drama makes the drive to school, practice, the store, vacation, or anywhere an entertaining time of family faith-building.

MSRP:
Now: $24.95
Was: $35.00
While supplies last! This timeless wall tapestry is a woven rendition of "The Last Supper," the famous painting by Leonardo da Vinci. The image depicts the Last Supper when Christ instituted...

MSRP:
Now: $9.95
Was:
The tremendous power and symbolism of the Saint Benedict Medal in beautifully engraved stainless steel!

MSRP:
Now: $5.95
Was:
This 2" Saint Benedict Crucifix necklace is a great means of asking for heavenly protection! It comes with an explanation of the origin of the medal and its meaning.

MSRP:
Now: $32.95
Was:
A very beautiful and sturdy white enameled crucifix provides you with the blessing of St. Benedict, protecting you from the wiles of the devil.  This large format Saint Benedict Crucifix is 8...

MSRP:
Now: $63.95
Was:
An exquisitely crafted rosary made from tin cut emerald Bohemian Crystal beads with detailed Miraculous Medal centerpiece and an ornate crucifix. A quality rosary with a nice weight to it! 24 inches...

Our Lady of Czestochowa Wall Tapestry

MSRP:
Now: $39.95
Was: $45.00
While supplies last! This exquisite wall tapestry is a woven rendition of the image known as Our Lady of Czestochowa. Tradition holds that it was painted by Saint Luke. Also known as the "Black...