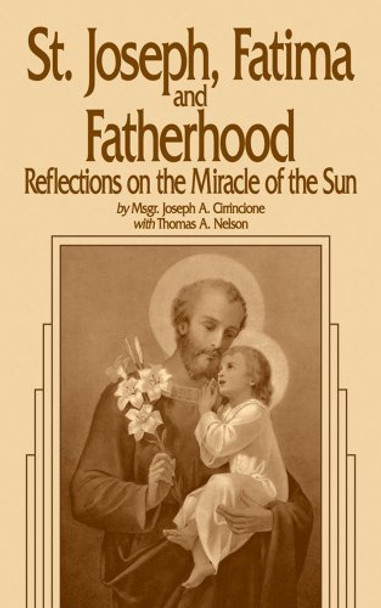 Reflections on the Miracle of the Sun. By Msgr. Joseph A. Cirrincione

On October 13, 1917, just before the great "Miracle of the Sun" was manifested to some 70,000 spectators at Fatima, Portugal, there appeared to the three child-visionaries an unusual scene. To the right of the sun, they saw the Blessed Virgin Mary robed in white with a blue mantle. Standing to the left of the sun was St. Joseph holding the Child Jesus, both blessing the world.

Msgr. Joseph A. Cirricione, a 40-year student of the Fatima apparitions, appears to be the first writer to study and analyze for Catholic readers the significance and message of this singular apparition, especially with regard to what it says about St. Joseph. In the process, he arrives at some profound and sobering conclusions, both for the Church and the world. He also contributes several original and extremely germane ideas to the general study of St. Joseph, such that the contents of this little booklet must become universally known among all Catholics.

MSRP:
Now: $3.99
Was:
May Saint Joseph guide and guard all travelers, just as he did his own little family, two thousand years ago, according to the promptings of the Holy Spirit, with the help of angels. Amen. Simple...

MSRP:
Now: $49.50
Was:
High quality art and workmanship make this 3/4 " sterling silver medal of Saint Joseph truly beautiful! Medal bears the inscription, "St. Joseph, pray for us" on the reverse side. Comes on 18 "...

MSRP:
Now: $10.95
Was:
Saint Joseph the Worker gained his sanctity through his holy life as a carpenter. This unique ceramic mug is a daily reminder for the Catholic working man. Carpentry tools adorn this...

MSRP:
Now: $11.95
Was:
Saint Joseph, pray for us! Adorn a shelf, mantle, or bedside table with this beautiful, high-quality, glossy wood arched desk plaque. Saint Joseph holds the lily in his hand as a sign of his...

MSRP:
Now: $25.00
Was:
This unique scarf has an incredible story behind it! For almost 100 years, the words "Viva Cristo Rey" (Long Live Christ the King) have echoed in the hearts and lives of Catholics throughout the...

MSRP:
Now: $8.50
Was:
Tapestry-style pouch with a beautiful image of the Holy Family, Jesus, Mary and Joseph. Many people use this to hold their rosaries though it is a little larger than your usual rosary pouch. A...

MSRP:
Now: $28.95
Was:
Designed and machine embroidered by the Sisters, Slaves of the immaculate Heart of Mary, this cotton canvas tote is perfect for carrying heavy items. This lovely design of ship and the words of...

Our Lady of Sorrows Pouch

MSRP:
Now: $8.50
Was:
Exquisite tapestry-style pouch of Our Lady of Sorrows. Many people use this to hold their rosaries though it is a little larger than your usual rosary pouch. A beautiful multi-use catholic...

MSRP:
Now: $9.95
Was:
The Divine Favors Granted to Saint Joseph by Pere Binet sets forth the exalted stature of Saint Joseph in the Communion of Saints. Chosen by God for the incomparable vocation of spouse of the...

MSRP:
Now: $29.95
Was:
The Manual for Marian Devotion will deepen your relationship with Mary and, in doing so, draw you closer to her Son. The primary purpose of this little work is to provide Catholics with a basic...