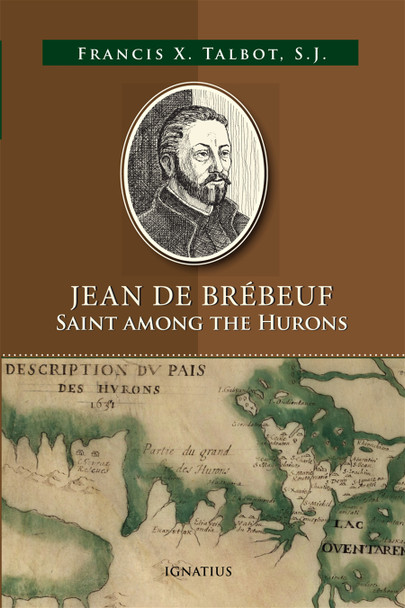 The Hurons stared at the giant young Norman, as tall and broad as they, a Jesuit priest robed in black and with a full black beard on his gentle face. He was to live among them for nineteen years, patiently and with enormous difficulty learning their ways and language. He would eat their raw bear and moose meat, paddle many months and many miles in their canoes, build his rough chapel surrounded by their long houses, and win their respect and love, leading a small band of them into the Christian faith.

At length, joined by other "Blackrobes", Father Jean de Brébeuf erected a bit of Old France, with church and stockade, in the Canadian wilderness. Yet he saw his village chapels burned, his converts shunned and tortured, and his fellow priests murdered by the Iroquois, the enemy of the Hurons. Never disturbed by fears for his own safety, he also died at their hands after incredible tortures in 1649.

This swift-paced book is more than a biography of a great saint. It is a vital chapter in the tragic history of New France in North America, a story of the failure of colonization partially redeemed by the blood of the martyrs of the Church.

MSRP:
Now: $4.95
Was:
Saint John Bosco was a revolutionary in the field of Education. This pedegogue revamped the system of his era with a timeless system based on joy and kindness. His unique life, dreams and prophecies...

MSRP:
Now: $4.95
Was:
Saint John de Brebeuf, a professed Jesuit of towering stature, left his comfortable surroundings in France to evangelize the "Children of the Forest" in North America. His mission was urgent, his...

MSRP:
Now: $4.95
Was:
The life of Saint John Marie Vianney is one of a priest in a lonely and obscure village in France, has left an unforgettable mark in the history of the Church. Declared "Patron of Parish Priests,"...

MSRP:
Now: $9.95
Was:
Francis Talbot, SJ, gives a gripping account of the life and missionary works of Saint Isaac Jogues, SJ.  Jogues left Renaissance France, to work as a missionary in

MSRP:
Now: $17.95
Was:
Evelyn Waugh presented his biography of St. Edmund Campion, the Elizabethan poet, scholar and gentleman who became the haunted, trapped and murdered priest as "a simple, perfectly true story of...

MSRP:
Now: $29.95
Was:
This unique denim apron features a sweet image of the Christ Child handing a flower to the Blessed Mother who is seated on a stool. Below are the words: All things begin small. It is the perfect...

MSRP:
Now: $12.95
Was:
Send a Catholic greeting to everyone you know! This lovely collection of greeting cards features unique images of Our Blessed Mother taken from antique holy cards and vintage artwork. Sets include...

MSRP:
Now: $49.95
Was:
Exclusively from our monastery, you can now show your special devotion with these iconic symbols of the Miraculous Medal, the Carmelite symbol, and the Saint Benedict Medal embroidered onto...

MSRP:
Now: $4.95
Was: $7.95
This rare colorized version of the masterpiece by 19th century artist Albert Lynch, portrays Joan of Arc in her true spirit – young and pure, yet strengthened by God to accomplish an incredible...