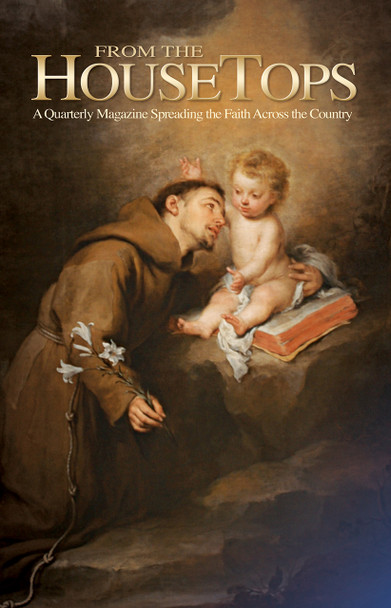 Born in Portugal, Saint Anthony has been adopted by the Italians as the patron of Padua. Once an Augustinian priest, he later joined the newly founded Franciscans and preached throughout Europe, converting many heretics. So many miracles were attributed to him that he was canonized one year after his death.

Other articles in this issue include:

MSRP:
Now: $3.00
Was:
A role model for all mothers, Monica treasured the immortal soul of her son and husband more than life itself. Spending her whole married life in prayer and penance for her pagan husband and wayward...

MSRP:
Now: $10.95
Was:
This high quality ceramic mug, displays an image of the dear and powerful Saint Anthony of Padua holding the Christ Child in his arms. On the reverse is a powerful prayer to Saint Anthony...

MSRP:
Now: $8.50
Was:
Tapestry-style rosary pouch with a beautiful image of Saint Anthony holding the Christ Child.  Many people use this to hold their rosaries though it is a little larger than your usual rosary...

MSRP:
Now: $11.95
Was:
Saint Anthony of Padua, pray for us! Adorn a shelf, mantle, or bedside table with this beautiful, high-quality, glossy wood arched desk plaque. Comes with an easel back and hanging hook. 4”x 6...

MSRP:
Now: $3.00
Was:
Had he pursued his career in law, the name and life of Alphonsus Ligouri would have been forgotten soon after his death. We must be forever grateful that by cooperating with grace, Alphonsus...

MSRP:
Now: $3.00
Was:
Saint Anne, mother of the Mother of God, has remained one of the most dear saints since the very start Christianity. Many shrines in her honor have been the haven of consolation for the spiritually...

MSRP:
Now: $3.00
Was:
This is the extraordinary account o Korea's Catholic history and its most illustrious saint and martyr, Saint Andrew Kim, its first native born priest. Other articles in this issue include: •...

MSRP:
Now: $3.00
Was:
This astounding story of conversion and sanctity is an encouraging example to those discouraged and seemingly hopelessly addicted to bad habits. It shows that nothing is beyond God's intervention...

MSRP:
Now: $3.00
Was:
Saint Dominic, a contemporary of Saint Francis of Assisi, was zealous for the conversion of souls which lead him to found the Order of Friars Preachers. His life is an exciting adventure of...

MSRP:
Now: $3.00
Was:
Saint Francis' story is the charming tale of a rich and unsatisfied noble with shallow goals of glory, who discovers a dramatic fulfillment in rejection of these values. Instead he pursues a life of...

MSRP:
Now: $3.00
Was:
Surrounded by high society with its pomps and glory, this young saint's life is a beautiful example of spiritual strength. Keeping his soul focused on the everlasting riches of virtue and holiness,...

MSRP:
Now: $3.00
Was:
A princess, a wife, a mother and a widow… This is the fantastic story of a princess in the Middle whose life was a mixture of beauty and brutality, riches and poverty, love and hatred. Deeply...

MSRP:
Now: $3.00
Was:
Saint Benedict, Father of Western Monasticism, cuts a prestigious figure both historically and spiritually. His influence is still with us today, leaving his impact on the world in education, art,...

MSRP:
Now: $3.00
Was:
Saint John Bosco was a revolutionary in the field of Education. This pedegogue revamped the system of his era with a timeless system based on joy and kindness. His unique life, dreams and prophecies...