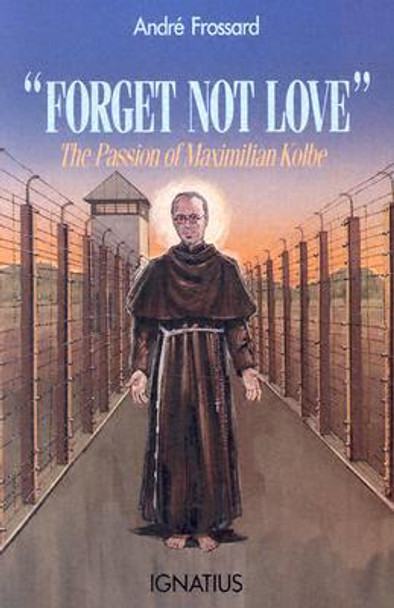 The heroic story of Saint Maximilian Kolbe, a modern apostle of Catholic evangelization, Marian spirituality, and a martyr of charity. The dramatic and moving life of this Polish Franciscan who volunteered to die in place of a fellow prisoner in Auschwitz.

While his heroic martyr's death is well known, Frossard shows how Kolbe's whole life was one of extraordinary generosity in devotion to his ideal of "love without limits." Kolbe was that rare combination of mystic, intellectual genius, theologian, and down-to-earth practicality. His tremendous creative energies (despite constant bouts of tuberculosis and less than one lung) enhanced the lives of all those who knew him, the millions who read his publications, and the countless persons inspired by his example. Forget Not Love reveals the interesting and impressive details of Kolbe's childhood, vision of Mary, brilliance in his studies, his founding of the largest monastery in the world (700 Franciscans), massive printing apostolate, missionary journeys to Japan, and his final act of love in Auschwitz. Frossard has captured the heart of the man whom Pope John Paul II declared "the patron saint of this difficult century."

MSRP:
Now: $17.95
Was:
Fulton Sheen, with his characteristic eloquence and brilliance. presents a moving portrayal of the Blessed Virgin Mary, combining deep spirituality with history, philosophy and theology. Paperback;...

MSRP:
Now: $13.95
Was:
by Fr. Mateo Crawley-Boevey, SS.CC.  This is a book written by a recognized master of the spiritual life, a leader of a most helpful and inspirational movement for the sanctification of the...

See How She Loves Us

MSRP:
Now: $16.95
Was:
"Mary has made herself all to all, and opens her merciful heart to all, that all may receive of her fullness; the sick, health; those in affliction, comfort; the sinner, pardon; and God, glory." ~St...

I Believe In Love

MSRP:
Now: $18.95
Was:
The key to happiness from one who found it in joyful abundance: St. Thérèse of Lisieux. This spiritual classic has long been beloved by Catholics for its wondrous distillation of the teaching of St...

MSRP:
Now: $5.95
Was:
The truth about Purgatory . . . revealed more than 500 years ago to a canonized saint! Here is the sensible view of Purgatory, tainted by neither childish superstition nor modern skepticism. From...

MSRP:
Now: $79.95
Was:
The symbolism of this sterling silver bracelet indicates that the wearer has made the Total Consecration to Mary through the formula set forth by St. Louis Marie de Montfort in "True Devotion...

MSRP:
Now: $14.95
Was:
"Listen, Father Jerzy, today is September 14, your birthday. So if you are supposed to do something, this is the day!" So prayed Father Bernard Brien beside the bed of a dying man. As soon as the...

MSRP:
Now: $5.95
Was:
Along with True Devotion Rings and Bracelets, you can now show your devotion to Our Lady with these brown scapulars!  Designed and sold exclusively by the Sisters, Slaves of the Immaculate...

How to Converse with God

MSRP:
Now: $4.95
Was:
In this booklet, St. Alphonsus Ligouri teaches us how to use the small events of everyday life to raise our hearts and minds to God: in praise, contrition, hope, joy, and union with God's will. In...

MSRP:
Now: $29.95
Was:
This exclusive denim apron features a unique artistic portrayal of Our Lady of Guadalupe (designed by the Sisters) and the sweet spanish words: ¡Viva Mi Madre! (Long live my Mother!) It is a...