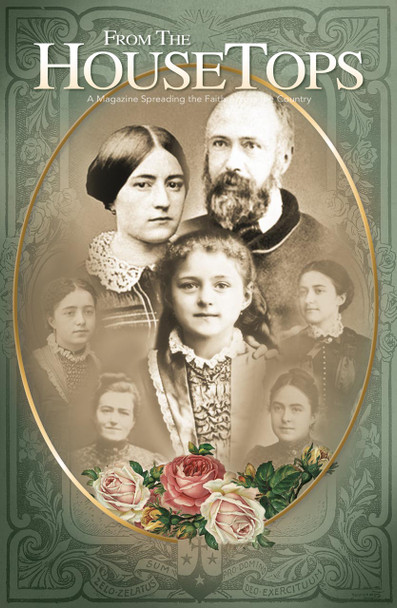 The story of Zelie and Louis Martin, recently canonized together as a married couple, is the tender tale of two people in love who put God first in their relationship. Although they were affluent, they led a life replete with sufferings and loss of four of their children. Cancer and a form of dementia also affected the parents, but their Faith and the Faith of their children never wavered, as they accepted everything from the hands of God. Their heroic forbearance in times of trial truly merited the title of "Saint" for each of them, as you will agree when you read the story.

On the cover is a collection of portraits of the Martin family. Zelie, the mother, and Louis, the father, stand above their youngest daughter, Saint Therese. The four other daughters are pictured on either side.

The Story of a Family

MSRP:
Now: $28.95
Was:
In her Story of a Soul, St. Therese relates how influential her family life was in forming her spiritual life. Now, the canonization of her parents Louis and Zelie and the cause for the beatification...

MSRP:
Now: $4.95
Was:
The life of Saint Martin de Porres, miracle worker, father of the poor, and humble Dominican, is a source of inspiration to all those who aspire to be a true follower of Christ. Born in Lima, Peru,...

MSRP:
Now: $8.50
Was:
Tapestry-style pouch with a beautiful image of the Holy Family, Jesus, Mary and Joseph. Many people use this to hold their rosaries though it is a little larger than your usual rosary pouch. A...

MSRP:
Now: $63.95
Was: $74.40
Special Offer for Limited Time! The Total Consecration Collection includes everything you need to complete your consecration to Mary, so through her, one can be consecrated to Christ. The...

The Infant of Prague

MSRP:
Now: $4.95
Was:
Holy statues of Our Lord, Our Lady and the saints have been part of Catholic for centuries! The most commonly identified is the Infant of Prague, which depicted the Child Jesus as an Infant King. The...