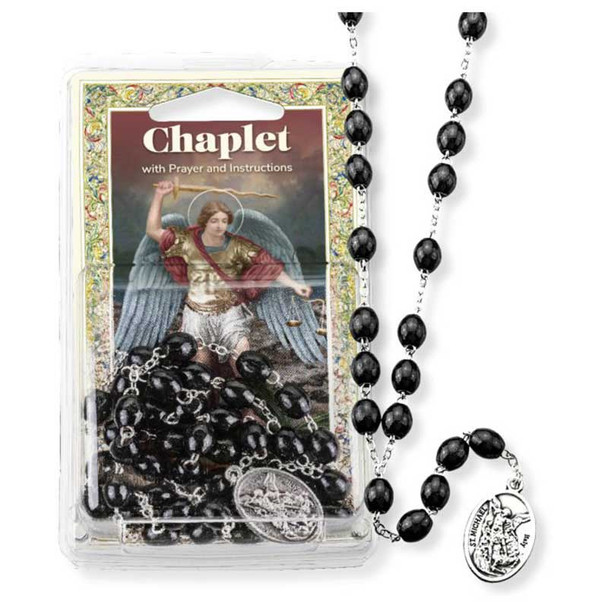 History: One day, Saint Michael the Archangel appeared to Antonia d'Astonac, a most devout Servant of God and told her that he wished to be honoured by nine salutations corresponding to the nine Choirs of Angels, which should consist of one Our Father and three Hail Marys in honour of each of the Angelic Choirs.

Promises of St. Michael: "Whoever would practice this devotion in his honour would have, when approaching the Holy Table, an escort of nine angels chosen from each of the nine Choirs. In addition, for the daily recital of these nine salutations, he promised his continual assistance and that all the holy angels during life, and after death deliverance from Purgatory for themselves and all their relations."

MSRP:
Now: $3.99
Was:
Saint Michael the Archangel, defend us in battle…and in traffic! Display Heaven's greatest warrior on your vehicle with this premium transparent vinyl decal. The dramatic image of the beautiful...

MSRP:
Now: $10.95
Was:
Saint Michael, the great Warrior of Heaven, is depicted on this impressive ceramic mug with the words "Saint Michael Defend Us." On the reverse is the image of two crossed swords overlayed with the...

MSRP:
Now: $8.95
Was:
Saint Michael, pray for us! Hang these lovely mini-posters in home or office or parish hall as a reminder to invoke this great Archangel for protection and strength! Each features a picture of Saint...

MSRP:
Now: $49.00
Was:
Saint Michael, Pray for us! This quality crafted sterling silver Saint Michael Medal has the words: Saint Michael Pray for Us around the edge.  Wearing blessed sacramentals such as this...

MSRP:
Now: $24.95
Was:
A quality book cover that is sure to protect your missal or bible for many years to come… and inspire devotion! This cover features a beautiful embroidery of the powerful Saint Benedict...

MSRP:
Now: $23.95
Was:
This gift package contains one Seven Dolors Rosary Chaplet (black beads) with prayer and instructions. According to St. Bridget of Sweden (1303-1373), seven promises were made to those who...

MSRP:
Now: $25.00
Was:
This unique scarf has an incredible story behind it! For almost 100 years, the words "Viva Cristo Rey" (Long Live Christ the King) have echoed in the hearts and lives of Catholics throughout the...

MSRP:
Now: $8.95
Was:
Saint Michael, pray for us! Hang these lovely mini-posters in home or office or parish hall as a reminder to invoke this great Archangel for protection and strength! Each features a picture of Saint...

MSRP:
Now: $14.95
Was:
This quality pewter medal with chain includes a beautiful story card, all at an affordable price. The genuine pewter scapular medal has a beautifully-detailed image of 'The Sacred Heart' of Jesus,...

MSRP:
Now: $14.95
Was:
This quality pewter Miraculous Medal comes on a chain with a beautiful story card story of this medal! The genuine pewter medal has a beautifully-detailed image of 'Our Lady of Grace', with the words...

MSRP:
Now: $12.00
Was:
The 2023 Traditional Calendar of Saints features artistic renditions of exquisite paintings from churches in Italy. Liturgical prayers and verses coincide with the images for each month, and are sure...

MSRP:
Now: $29.95
Was:
The San Benedetto Rosary is made of 5 tones of crystal beads with antique gold tone finish on the crucifix and centerpiece. It comes in a very attractive gift box along with a certification that...