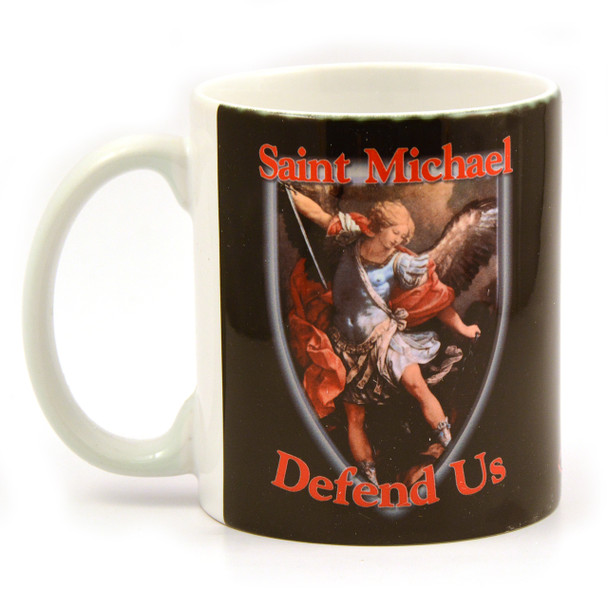 Saint Michael, the great Warrior of Heaven, is depicted on this impressive ceramic mug with the words "Saint Michael Defend Us." On the reverse is the image of two crossed swords overlayed with the prayer to Saint Michael.  Start your morning, or end your day, with a prayer to our great protector!

Dishwasher safe Made in USA

Saint Michael the Archangel is the leader of all the angels and of the army of God. This is what the title "Archangel" means, that he is above all the others in rank.

St. Michael has four main responsibilities or offices, as we know from scripture and Christian tradition.

The traditional Prayer to Saint Michael is:

"Saint Michael the archangel, defend us in battle. Be our protection against the wickedness and snares of the Devil. May God rebuke him, we humbly pray, and do thou, O Prince of the Heavenly hosts, by the power of God, cast into Hell Satan, and all the evil spirits who prowl about the world, seeking the ruin of souls. Amen."

We most certainly need the protection and intercession of Saint Michael in today's world and in our Church more than ever!

MSRP:
Now: $3.99
Was:
Saint Michael the Archangel, defend us in battle…and in traffic! Display Heaven's greatest warrior on your vehicle with this premium transparent vinyl decal. The dramatic image of the...

MSRP:
Now: $13.95
Was:
Of Mary there is never enough! Enjoy your favorite drink while you look at this intricate symbol of the Miraculous Medal. On the reverse are the words: Let us faithfully invoke Mary. Let us lover...

MSRP:
Now: $10.95
Was:
Saint Joseph the Worker gained his sanctity through his holy life as a carpenter. This unique ceramic mug is a daily reminder for the Catholic working man. Carpentry tools adorn this...

MSRP:
Now: $10.95
Was:
This high quality ceramic mug features an actual photograph of Saint Padre Pio. On the reverse is found his motto: "Pray, Hope and don't worry!" What a great daily reminder! Dishwasher safe Made in...

MSRP:
Now: $13.95
Was:
Of Mary there is never enough! Enjoy your favorite drink while you look at this intricate symbol of the Miraculous Medal. On the reverse are the words: Let us faithfully invoke Mary. Let us lover...

MSRP:
Now: $10.95
Was:
This high quality ceramic mug, displays an image of the dear and powerful Saint Anthony of Padua holding the Christ Child in his arms. On the reverse is a powerful prayer to Saint Anthony...

MSRP:
Now: $10.95
Was:
Saint Gianna Molla, a modern day saint who was a wife, mother and doctor and pro-life patron, adorns this lovely ceramic mug. On the reverse is a quote by Saint Gianna: "One earns Paradise with one's...

MSRP:
Now: $52.95
Was:
This gorgeous 8" handpainted statue of Saint Kateri Tekakwitha, the Lily of the Mohawks, is lifelike and inspiring in all her mohawk splendor. Indoor / Outdoor. Gift boxed.

MSRP:
Now: $13.95
Was:
This mug features a unique painting of Our Lady of Total Consecration. Mary holds her immaculate Heart out to us as well as the chains of holy slavery to Jesus through Mary. On the reverse side is...

MSRP:
Now: $10.95
Was:
The symbolism of the powerful Saint Benedict Medal, and the motto of the Benedictine Order: "Ora et Labora – Pray and Work" make this medal a classy mug and catholic reminder. Dishwasher safe...